Today’s featured book is The Three-Day Affair by Michael Kardos. 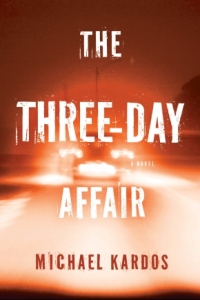 “The Three-Day Affair” by Michael Kardos

Why Clay Stafford chose this book:

Debut author Michael Kardos should be having a grand day today. Not only does he have a new book release today, but the book is riveting and I have no doubt he and his publisher both know it. No question, they have a good idea where this book is going.

From the very first page, Kardos had me. The writing is so natural that I read the first page of the preface three times trying to determine if this was an author forward or part of the book. Rarely do you read such naturalistic prose. As the book continues, it doesn’t let up. Suspenseful from the start and told through the point-of-view of a sympathetic everyday guy who finds himself in a situation he could not have foreseen, this thriller will kidnap you all the way to the bitter end. I’m not disclosing here what the book is about, you can read that in the blurbs. What I would like to recommend is that you buy this book and read it. Set aside a time where you won’t be disturbed. You will not be able to put it down.

“The first debut novel from the newly relaunched Mysterious Press introduces a phenomenal new voice in the realm of crime fiction.

Will, Jeffrey, and Nolan are lifelong friends. Each have gone their separate ways as adults, living their own lives while forging their own careers. They have no reason to believe anything extraordinary will befall them. Until one shocking moment changes everything…

Will is a part-time drummer who spends the rest of his time in recording studios. He has lived a sheltered existence. Then one night Jeffrey attempts to rob a convenience store, drags a young woman into Will’s car, and shouts a single word: “Drive!” Shaken and confused, Will obeys.

Suddenly three ordinary men find themselves completely out of their element, holding a young girl hostage without the slightest idea of what to do next. They are already guilty of kidnapping and robbery; it is only a matter of time before they find out just what else they’re capable of. For these four people, three days will decide their fate – between freedom and prison, innocence and guilt…and life and death. In the tradition of Scott Smith’s classic A Simple Plan, THE THREE-DAY AFFAIR marks the emergence of a truly talented new crime writer.”

If you want to make your own comments on this selection, we would love to hear from you. Join ourFacebook Killer Nashville group page or our blog and join in the discussion.

Remember that these books are listed at a discount through Amazon. You also don’t have to purchase the version that is featured here. Many of these books are available in multiple formats: e–book, hardcover, softcover, and audio. Enjoy!